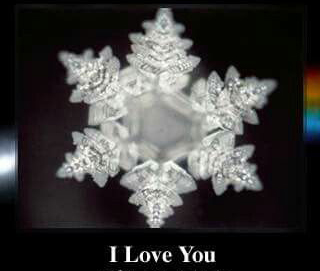 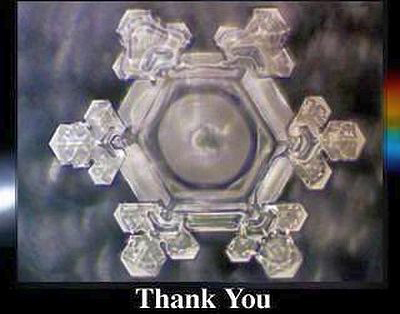 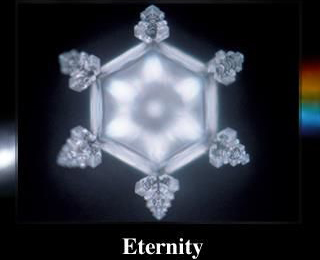 We all love Dr. Masaru Emoto and his gorgeous water crystal photos, right? And we all know that putting crystals in our water lifts the vibe, right? But what if our common understandings of these water phenomena are a bit off base? I’m here today to bust some hippie myths around crystalline water.

So, most everyone in the water movement has heard of Dr. Masaru Emoto, the brilliant water scientist who photographed water crystals and popularized the understanding of water’s consciousness. Thanks to the movie “What the Bleep do we Know,” his work swept the world by storm.

I’m Off to Japan! I've got some question that need answers...

Well, FIRST OFF, you guys, let me make an announcement. I’m THRILLED to share that I have been accepted to train at Dr. Masaru Emoto’s research institute and become an instructor in his HADO methodology!! Whooo!! In April I’ll be flying out to Tokyo to study and train. I’ve never been to Japan, and I’m so excited. But, I’ll be honest, I had some reservations. It took me a while before I decided to apply for this.

Because I have great respect for Dr. Masaru Emoto and infinite gratitude for the way his work spread into the world and created a massive awakening of awareness about the consciousness of water. HOWEVER ~ there has been a lot of scientific debate over the validity of his research methods, and an inconsistency in other labs ability to reproduce his findings. One reason is because, for every sample of water he collected, he would take several hundred photographs under a dark field microscope. But he only chose to publish the most clearly defined, well-formed crystals. Which of course created a misrepresentation.

Because it’s not like the entirety of water molecules suddenly form crystals as soon as you slap the word “love” on a stagnant bottle of water. Not by a long shot.

Picture this: bulk water, which is the water we’re all accustomed to, that's found in lakes, streams and oceans, in municipal tap supplies and bottles, is a "sea of chaos" that has little or no molecular structure. But X-Ray diffraction studies have shown that inside this bulk water is a small percentage of molecules that are formed into liquid crystals. Like microscopic 'icebergs' floating in a chaotic ocean of violent disordered motion. So even bulk water contains liquid crystals of "variable bonding". This means water can restructure itself depending on its environmental energy fields.  It can increase or decrease the amount of crystalline icebergs floating in the bulk chaos. It can restructure those crystals to have different patterns. It’s always perceiving and responding.

The inability of some researchers to reproduce Emoto’s work, and the number of photographs that were necessary to find highly structured crystals tells me that his lab was probably working with bulk, stagnant water when they exposed it to words and music. Now, this doesn’t invalidate the legitimacy of waters awareness! Researchers might just be missing one step in the process.

Theodor Shwenk proved that it’s MOVEMENT which opens waters sensory awareness to be more sensitive to environmental stimuli. Homeopathic practitioners have known this for years - it’s why they put the water through turbulence as they expose it to medicinal compounds or frequencies.

As Dr. Patrick Flanagan said, "All flowing water, though it may appear to be uniform is divided into extensive inner surfaces. In flowing streams, millions of vortexes form when water breaks past stones, sticks, and other obstructions. These vortex patterns act as powerful resonant structures as well as energizers and electrifiers for water and colloids.”

In nature, water is always moving - changing phases, making her way through the hydrological cycle, flowing and floating. She only becomes stagnant when she comes into the care of humans who label her as an object in their possession, and they store her in bottles or tanks for later use. This is against nature, and it causes the molecular structure to disintegrate. This shifts the composition of the water so their are less crystallized clusters and more random chaotic molecules. In laboratories, this is referred to as “bulk” water. Which kind of water would you rather drink?

And which kind of water do you think would respond better to environmental stimuli, like the words Emoto used in his experiments, where the water was stored in bottles or glasses? As it turns out, the ability of water to sense and store and transmit information about its environment is directly proportional to the strength of the hydrogen bonds - in other words, water that is in a formation can store information.

In fact, this movement-as-awareness property holds so true, that, I’m sorry, but I’m going to have to burst another new age water bubble here. Every woke wook knows that by putting crystal in your water, it’s going to make it better juju, right?

Water Rocks - Should I put crystals in my carafe?

One of my other favorite water researchers, Dr. Patrick Flanagan, did some research in 1974 into the property of “epitaxy” or “transference”. This is where a solid or liquid that is highly ordered (like a crystal) will bring more order and structure to any random (bulk) water that it is in or near. So if you have a quartz in your water, the hexagonal SiO2 structure will lower the waters surface tension and help it keep its structure, via this epitaxy transference.

But Dr. Flanagan showed that when water begins moving again, it will re-form its structures, effectively erasing whatever vibration had been imbued by the crystal.

Of his experiments, he wrote “The crystal effect would persist as long as the water was not disturbed in a turbulent way. When crystal treated water was poured it had to be done so in a laminar fashion.”

Even just the process of swallowing water down the esophagus could cause the water to lose some of the information it received from the crystal. So, according to Flanagan, if you’re going to keep crystals in your water then it’s important to use the water carefully, drinking slowly with minimal disturbance. This is why I am wary of so-called crystal infused waters and gem elixirs for sale. Crystal energized water cannot be stored or shipped because of this ephemeral nature of the hydrogen bonds.

So… Will putting the word “love” on your water bottle make an impact on it’s “hado” or frequency? Sure. But not enough to stay put in the water’s memory if your dominant emotion when you drink it is anything other than “love”. If you feel “tired” and your water bottle says “love”, well, honey, the molecules will imprint when it flows down your esophagus a lot more strongly than it will imprint when sitting still in a bottle.

In other words, having a crystal in your water will help it to maintain its hydrogen bonds, but it will not strengthen them to a point where they are stable enough to stay put. For the bonds to be highly stable and well-connected, the water must be exposed to radiant energy, or contain highly charged nano-colloids, or be continuously vortexed for a while first. (( Click links to purchase water structuring tools ))

In conclusion, should you tape affirmations on your water and fill it with crystals?

Sure, why not. Knock yourself out. Especially if it helps you be more present to and aware of the lucidity of water’s consciousness. If it helps you form a more personal relationship with the source of life, then go for it! But don’t overestimate the effects of words and crystals. They're helpful, but they're not the MOST effective tools.

So perhaps if Emoto had vortexed his water samples before photographing them, he would have found more consistency and prevalence of fully formed crystals under the microscope. And perhaps if the researchers seeking to replicate his findings did the same, they’d discover the truth and credibility of his pioneering work. With all that being said, I’ll soon to have the opportunity to go peer into these dark-field microscopes myself and learn exactly how the whole process works inside of the lab! So hopefully that will clarify some of these specificities of technique and nuance.

My second qualm with Dr. Emoto’s work is no fault of his own. He is often credited with being the discoverer of structured water and this is not accurate. Dr. Gerald Pollack is also often given that same accolade but it wasn’t him either. As far as I can tell, the first researchers to “discover” the structure of water was my personal hero, Viktor Schauberger in the late 1800s, who uncovered natures water secrets. Or maybe it was a relatively unknown scientist, Dr. Henri Coanda whose research into fluid dynamics is partially responsible for the way modern jets fly (did you know air is technically classified as a fluid?!) or maybe it was Sir William Hardy over a hundred years ago, who first theorized that there MUST be a fourth phase of water, as it’s the only possible explanation that could explain so many anomalous behaviors that water has, and how it could mysteriously transform into the substance that sustains all living beings. Or maybe it was Dr. Marcel Vogel, who invented the Liquid Crystal LCD screen you’re reading this on and then quit his prestigious job at IBM to devote his life to studying water and crystals. Maybe it was him. Who was the first? Or the most influential? Hard to say. Regardless, there have been a LOT of scientists researching the phenomenon of structured water long before Emoto, and each one of them deserves more love and attention for their pioneering work.

So if you LOVE the work of Dr. Emoto like I do and want to expand your water wisdom even further, here are some other researchers I think you’ll fall in love with as well. I’d love to see their discoveries spread with the same tidal wave of enthusiasm that Emoto’s has (in no particular order, except OF COURSE my bae Schauberger is at the top):

Enjoy those rabbit holes of fascination!

Transform your relationship to and understanding of

THE LIQUID SOURCE OF LIFE.

Find out how different kinds of water affect your mind

and your body very differently. Because what you drink, you become.

And if you want to learn and experience, hands-on, how to make your own water into vibrant, living, healing water, and if you want to cultivate a deeper connection with the source of life through the merging of science and spirit, then join us at the sacred waters of Koh Phangan in May for a 6 day immersion into the depth of water’s mysteries. Experience how good you can feel when you're fully hydrated on a cellular level, receive underwater bodywork sessions, understand how your aquatic body and the watery universe are interconnected, and become empowered as a water guardian at a time when water needs you most! Early bird discount is available now, it’s super affordable and infinitely valuable. Details at www.waterislife.love/retreat

I hope you’ve gotten some value out of this, if you learned something new, please share this! And if you want to stay in the loop about water, subscribe to the newsletter, or follow me on Instagram where I post travel updates as I wanderlust around and make my way to Japan, and to follow my whole water journey and learnings on there @jenisabelfriend, and check out my youtube channel where I post new videos as often as I can. As always I want to keep bringing you valuable content, so let me know what you’d like to learn about water, and I’ll make a post just for you!

Have a blessed day and stay hydrated!

New Resources & Guides! Dive in to Learn More, then Drink Up 🙃💦